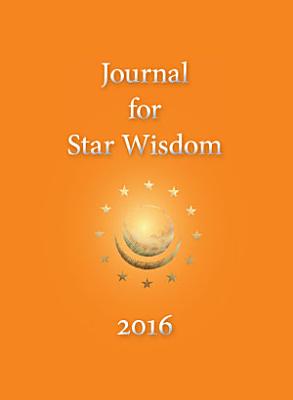 Journal for Star Wisdom 2016 includes articles of interest concerning star wisdom (Astrosophy), as well as a guide to the correspondences between stellar configurations during the life of Christ and those of today. This guide comprises a complete sidereal ephemeris and aspectarian, geocentric and heliocentric, for each day throughout the year. Published yearly, new editions are available beginning in October or November for the coming new year. According to Rudolf Steiner, every step taken by Christ during his ministry between the baptism in the Jordan and the resurrection was in harmony with—and an expression of—the cosmos. Journal for Star Wisdom is concerned with these heavenly correspondences during the life of Christ. It is intended to help provide a foundation for cosmic Christianity, the cosmic dimension of Christianity. It is this dimension that has been missing from Christianity in its two-thousand-year history. Readers can begin on this path by contemplating the movements of the Sun, Moon, and planets against the background of the zodiacal constellations (sidereal signs) today in relation to corresponding stellar events during the life of Christ. In this way, the possibility is opened for attuning, in a living way, to the life of Christ in the etheric cosmos. This year's journal begins with an article by Robert Powell on the relationship between the galactic center and Christ’s miracle of the healing of the man born blind, followed by an article by Estelle Isaacson about the life of the man born blind, whose name was Celidonius. She has also written on the “star of Lazarus and reading the starry script.” Claudia McLaren Lainson’s article “The Towers We Build” relates to the planet Uranus and events of our time against the background of the position of Uranus—in 2016, the same as shortly after Christ’s Ascension. She also honors psychologist and astrosopher William Bento, who died on June 5, 2015, with her “In Memoriam.” David Tresemer’s article, written with Robert Schiappacasse, expands on a short contribution from William Bento. Brian Gray’s article focuses upon the birth of Jesus—in terms of a stellar imagination—in relation to the three kings on the one hand and the shepherds on the other. Nicholas Kollerstrom contributed “Position of the Ancient Star Zodiac,” presenting his research into the original scientific definition of the zodiac. The article “Specters” by Kevin Dann takes a unique approach to “The Fall of the Spirits of Darkness,” the subject of David Tresemer’s article. The monthly commentaries for 2016 by Claudia McLaren Lainson are supported by monthly astronomical previews by Sally Nurney, offering opportunities to observe and experience physically the stellar configurations during 2016. This direct interaction between the human being on Earth and the heavenly beings of the stars develops the capacity to receive their wisdom-filled teachings.

Authors: Robert Powell
Categories: Body, Mind & Spirit
The year 2014 has a special significance that is addressed in this book by Robert Powell and Estelle Isaacson. Dr. Robert Powell is a spiritual researcher who i

Authors: Robert Powell
Categories: Religion
Who were the three wise men and what was "the Star of the Magi" that led them to Bethlehem? Using the dialogue form, Christian Hermetic Astrology explores these

As Above, So Below

Authors: Kevin Dann
Categories: Travel
A fantastical field guide to the hidden history of New York's magical past Manhattan has a pervasive quality of glamour—a heightened sense of personality gene

Board Games: Throughout The History And Multidimensional Spaces

Authors: Kyppo Jorma
Categories: Mathematics
In this richly illustrated book, Dr Jorma Kyppö explores the history of board games dating back to Ancient Egypt, Mesopotamia, India and China. He provides a d