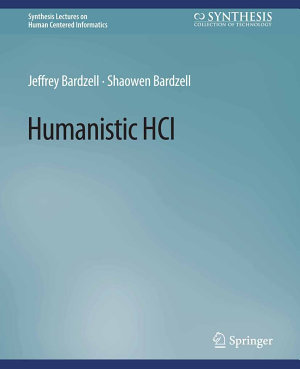 Although it has influenced the field of Human-Computer Interaction (HCI) since its origins, humanistic HCI has come into its own since the early 2000s. In that time, it has made substantial contributions to HCI theory and methodologies and also had major influence in user experience (UX) design, aesthetic interaction, and emancipatory/social change-oriented approaches to HCI. This book reintroduces the humanities to a general HCI readership; characterizes its major epistemological and methodological commitments as well as forms of rigor; compares the scientific report vs. the humanistic essay as research products, while offering some practical advice for peer review; and focuses on two major topics where humanistic HCI has had particular influence in the field—user experience and aesthetics and emancipatory approaches to computing. This book argues for a more inclusive and broad reach for humanistic thought within the interdisciplinary field of HCI, and its lively and engaging style will invite readers into that project.