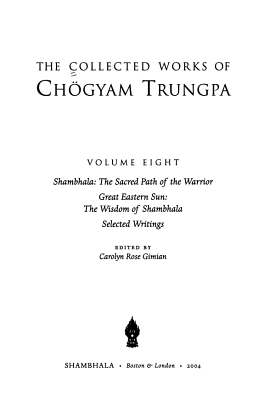 The Collected Works of Chögyam Trungpa brings together in ten volumes the writings of the first and most influential and inspirational Tibetan teachers to present Buddhism in the West. Organized by theme, the collection includes full-length books as well as articles, seminar transcripts, poems, plays, and interviews, many of which have never before been available in book form. From memoirs of his escape from Chinese-occupied Tibet to insightful discussions of psychology, mind, and meditation; from original verse and calligraphy to the esoteric lore of tantric Buddhism-the impressive range of Trungpa's vision, talents, and teachings is showcased in this landmark series. Volume Three captures the distinctive voice that Chögyam Trungpa developed in North America in the 1970s and reflects the preoccupations among Western students of that era. It includes Cutting Through Spiritual Materialism and The Myth of Freedom, the two books that put Chögyam Trungpa on the map of the American spiritual scene. The Heart of the Buddha and sixteen articles and forewords complete this volume.

The Collected Works of Chögyam Trungpa: Shambhala : the sacred path of the warrior ; Great eastern sun : the wisdom of shambhala ; Selected writings

Authors: Chögyam Trungpa
Categories: Buddhism
The Collected Works of Chögyam Trungpa brings together in ten volumes the writings of the first and most influential and inspirational Tibetan teachers to pres