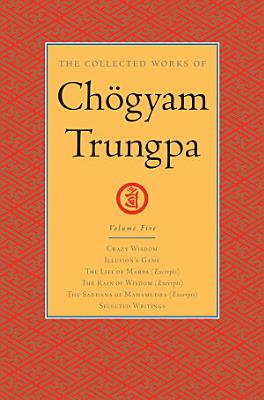 The Collected Works of Chögyam Trungpa brings together in eight volumes the writings of one of the first and most influential and inspirational Tibetan teachers to present Buddhism in the West. Organized by theme, the collection includes full-length books as well as articles, seminar transcripts, poems, plays, and interviews, many of which have never before been available in book form. From memoirs of his escape from Chinese-occupied Tibet to insightful discussions of psychology, mind, and meditation; from original verse and calligraphy to the esoteric lore of tantric Buddhism—the impressive range of Trungpa's vision, talents, and teachings is showcased in this landmark series. Volume Five focuses on the lineages of great teachers who have transmitted the Tibetan Buddhist teachings and on the practice of devotion to the spiritual teacher. It includes inspirational commentaries by Chögyam Trungpa on the lives of famous masters such as Padmasambhava, Naropa, Milarepa, Marpa, and Tilopa, as well as an excerpt from The Sadhana of Mahamudra, a tantric text that Chögyam Trungpa received as terma in 1968. Among the selected writings are "Explanation of the Vajra Guru Mantra," an article never before published, which deals with the mantra that invokes Guru Rinpoche; seminar talks available in book form for the first time; and previously unpublished articles on Milarepa.

Authors: Chogyam Trungpa
Categories: Religion
The Collected Works of Chögyam Trungpa brings together in eight volumes the writings of one of the first and most influential and inspirational Tibetan teacher