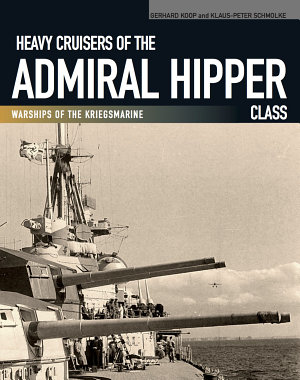 The warships of the World War II era German Navy are among the most popular subject in naval history with an almost uncountable number of books devoted to them. However, for a concise but authoritative summary of the design history and careers of the major surface ships it is difficult to beat a series of six volumes written by Gerhard Koop and illustrated by Klaus-Peter Schmolke. Each contains an account of the development of a particular class, a detailed description of the ships, with full technical details, and an outline of their service, heavily illustrated with plans, battle maps and a substantial collection of photographs. These have been out of print for ten years or more and are now much sought after by enthusiasts and collectors, so this new modestly priced reprint of the series will be widely welcomed.??This volume covers the Admiral Hipper class, among the largest heavy cruisers to serve in World War II. Intended to be a class of five, they enjoyed contrasting fortunes: Seydlitz and LÙtzow were never completed; BlÙcher was the first major German warship sunk in action; Admiral Hipper became one of the most successful commerce raiders of the war; while the Prinz Eugen survived to be expended as a target in one of the first American nuclear tests in 1946.