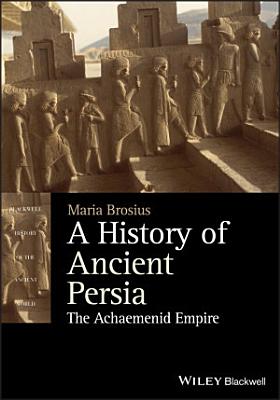 An innovative approach to the history of the First Persian Empire, offering an accessible historical narrative for students and general readers alike A History of the Achaemenid Empire considers archaeological and written sources to provide an expansive, source-based introduction to the diverse and culturally rich world of ancient Achaemenid Persia. Assuming no prior background, this accessible textbook follows the dynastic line from the establishment and expansion of the empire under the early Achaemenid kings to its collapse in 330 BCE. The text integrates the latest research, key primary sources, and archaeological data to offer readers deep insights into the empire, its kings, and its people. Chronologically organized chapters contain written, archaeological, and visual sources that highlight key learning points, stimulate discussion, and encourage readers to evaluate specific pieces of evidence. Throughout the text, author Maria Brosius emphasizes the necessity to critically assess Greek sources—highlighting how their narrative of Achaemenid political historyoften depicted stereotypical images of the Persians rather than historical reality. Topics include the establishment of empire under Cyrus the Great, Greek-Persian relations, the creation of a Persian ruling class, the bureaucracy and operation of the empire, Persian diplomacy and foreign policy, and the reign of Darius III. This innovative textbook: Offers a unique approach to Achaemenid history, considering both archaeological and literary sources Places primary Persian and Near Eastern sources in their cultural, political, and historical context Examines material rarely covered in non-specialist texts, such as royal inscriptions, Aramaic documents, and recent archaeological finds Features a comprehensive introduction to Achaemenid geography, Greek historiography, and modern scholarship on the Persian War Part of the acclaimed Blackwell History of the Ancient Worldseries, A History of the Achaemenid Empire is a perfect primary textbook for courses in Ancient History, Near Eastern Studies, and Classical Civilizations, as well as an invaluable resource for general readers with interest in the history of empires, particularly the first Persian empire or Iranian civilization.

A History of Ancient Persia

Authors: Maria Brosius
Categories: History
An innovative approach to the history of the First Persian Empire, offering an accessible historical narrative for students and general readers alike A History

From Cyrus to Alexander

Authors: Pierre Briant
Categories: Ancient World
Around 550 B.C.E. the Persian people--who were previously practically unknown in the annals of history--emerged from their base in southern Iran (Fars) and enga

Authors: Dr A Kuhrt
Categories: History
First Published in 2008. Routledge is an imprint of Taylor & Francis, an informa company.

Birth of the Persian Empire

Authors: Vesta Sarkhosh Curtis
Categories: History
Of the great ancient civilizations, that of Persia is the least known and the most enigmatic. This book explores the formation of the first Persian Empire under

Authors: John Manuel Cook
Categories: History
Traces the history of the Persian Empire and examines the development of its religious beliefs, armed forces, art, and architecture.

History of the Persian Empire

Authors: George Rawlinson
Categories: History
The First Persian Empire was a country of the Achaemenid dynasty, based in Western Asia, founded by Cyrus the Great. Ranging at its greatest extent from the Bal