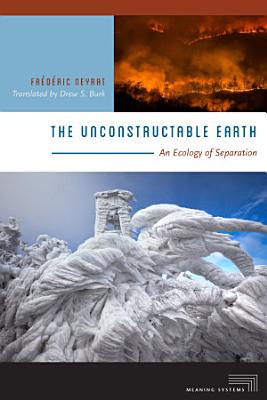 Winner, Grand Prize, French Voices Award for Excellence in Publication and Translation The Space Age is over? Not at all! A new planet has appeared: Earth. In the age of the Anthropocene, the Earth is a post-natural planet that can be remade at will, controlled and managed thanks to the prowess of geoengineering. This new imaginary is also accompanied by a new kind of power—geopower—that takes the entire Earth, in its social, biological and geophysical dimensions, as an object of knowledge, intervention, and governmentality. In short, our rising awareness that we have destroyed our planet has simultaneously provided us not with remorse or resolve but with a new fantasy: that the Anthropocene delivers an opportunity to remake our terrestrial environment thanks to the power of technology. Such is the position we find ourselves in, when proposals for reengineering the earth’s ecosystems and geosystems are taken as the only politically feasible answer to ecological catastrophe. Yet far from being merely the fruit of geo-capitalism, this new grand narrative of geopower has also been activated by theorists of the constructivist turn—ecomodernist, postenvironmentalist, accelerationist—who have likewise called into question the great divide between nature and culture. With the collapse of this divide, a cyborg, hybrid, flexible nature has been built, an impoverished nature that does not exist without being performed by technologies that proliferate within the space of human needs and capitalist imperatives. Underneath this performative vision resides a hidden anaturalism denying all otherness to nature and the Earth, no longer by externalizing it as a thing to be dominated, but by radically internalizing it as something to be digested. Constructivist ecology thus finds itself in no position to confront the geoconstructivist project, with its claim that there is no nature and its aim to replace Earth with Earth 2.0. Against both positions, Neyrat stakes out the importance of the unconstructable Earth. Against the fusional myth of technology over nature, but without returning to the division between nature and culture, he proposes an “ecology of separation” that acknowledges the wild, subtractive capacity of nature. Against the capitalist, technocratic delusion of earth as a constructible object, but equally against an organicism marked by unacknowledged traces of racism and sexism, Neyrat shows what it means to appreciate Earth as an unsubstitutable becoming: a traject that cannot be replicated in a laboratory. Underway for billions of years, withdrawing into the most distant past and the most inaccessible future, Earth escapes the hubris of all who would remake and master it. This remarkable book, which will be of interest to those across the humanities, natural sciences, and social sciences, from theorists to shapers of policy, recasts the earth as a singular trajectory that invites humans to turn political ecology into a geopolitics.

Authors: Frédéric Neyrat
Categories: Science
Winner, Grand Prize, French Voices Award for Excellence in Publication and Translation The Space Age is over? Not at all! A new planet has appeared: Earth. In t

Theology on a Defiant Earth

Authors: Jonathan Cole
Categories: Ecotheology
"In this book, theologians and scholars of religion grapple with the political, philosophical, and ethical implications of a climate crisis provoked by one spec

Twins and Recursion in Digital, Literary and Visual Cultures

Authors: Edward King
Categories: Literary Criticism
The tale of twins being reunited after a long separation is a trope that has been endlessly repeated and reworked across different cultures and throughout histo

Theory of the Earth

Authors: Thomas Nail
Categories: Philosophy
We need a new philosophy of the earth. Geological time used to refer to slow and gradual processes, but today we are watching land sink into the sea and forests

Paul J. Crutzen and the Anthropocene: A New Epoch in Earth's History

Authors: Susanne Benner
Categories: Atmospheric chemistry
This book outlines the development and perspectives of the Anthropocene concept by Paul J. Crutzen and his colleagues from its inception to its implications for

Faith after the Anthropocene

Authors: Matthew Wickman
Categories: Social Science
Recent decades have brought to light the staggering ubiquity of human activity upon Earth and the startling fragility of our planet and its life systems. This i

Indigenising Anthropology with Guattari and Deleuze

Geoengineering, Persuasion, and the Climate Crisis

Authors: Ehren Helmut Pflugfelder
Categories: Language Arts & Disciplines
A rhetorical exploration of an underexamined side of climate change—the ongoing research into and development of geoengineering strategies Geoengineering, Per

Authors: Andy Bruno
Categories: History
In 1908, thunderous blasts and blazing fires from the sky descended upon the desolate Tunguska territory of Siberia. The explosion knocked down an area of fores