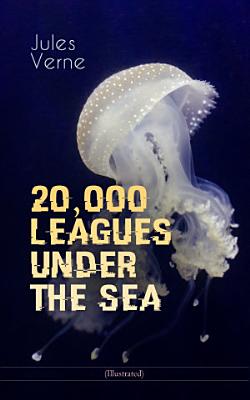 This carefully crafted ebook: "20,000 LEAGUES UNDER THE SEA (Illustrated)” is formatted for your eReader with a functional and detailed table of contents. "20,000 Leagues Under the Sea” is a classic science fiction novel by Jules Verne published in 1870. It tells the story of Captain Nemo and his submarine Nautilus, as seen from the perspective of Professor Pierre Aronnax. The title refers to the distance travelled while under the sea and not to a depth, as 20,000 leagues is over six times the diameter, and nearly three times the circumference of the Earth. The greatest depth mentioned in the book is four leagues. The book uses metric leagues, which are four kilometres each. A literal translation of the French title would end in the plural "seas", thus implying the "seven seas" through which the characters of the novel travel. The book was highly acclaimed when released and still is now; it is regarded as one of the premiere adventure novels and one of Verne's greatest works. Jules Verne (1828-1905) was a French novelist, poet, and playwright best known for his adventure novels and his profound influence on the literary genre of science fiction.