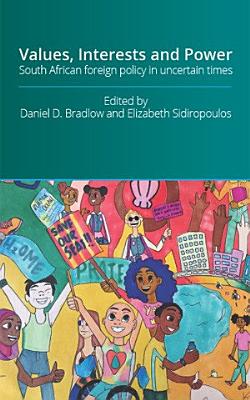 About the publication South Africa’s foreign policy makers are facing a substantial challenge. From the advent of the democratic era in 1994 through to the early 2000s, South Africa was a highly respected actor in international affairs with a number of impressive accomplishments in the areas of global governance, peacekeeping and international norm entrepreneurship. However, since that time, the country’s international standing has declined. The value based and innovative foreign policy that earned the early post-apartheid South African government such great international respect has been replaced by a more transactional and tactically driven approach to international affairs. The country’s position as Africa’s leading economy and voice in international affairs is increasingly being challenged by other African states. This book explores how South Africa can develop a foreign policy strategy that is appropriate to the uncertain times in which we live and that both helps the country address its overwhelming domestic challenges of poverty, inequality and unemployment and regain its former high international reputation. The contributors to this book offer analyses and proposals for developing such a strategy within the context of the country’s constitutional order and institutional constraints and that addresses the diverse and complex global and regional aspects of the country’s international relations. Endorsements: “In this valuable book – which should be on every diplomat’s bookshelf - some of SA’s foremost experts offer the government frank and compelling advice on how to conduct a much better foreign policy over the next decade. … The authors challenge Pretoria to muster all the country’s assets and skills – and not just those of the ruling party – to pursue only the most important foreign policy goals. And to be guided always by the lodestar of the Constitution.” Peter Fabricius, Foreign Policy Analyst, former Foreign Affairs Editor at Independent Newspapers. “In this one-of-a-kind book of twelve chapters by emerging and experienced scholars, the authors probe into factors shaping South African foreign policy, lessons learned and the future strategy of the country’s foreign policy in an ever-changing world. A compelling read for policy makers and scholars.” Ambassador Prof Iqbal Jhazbhay, University of South Africa, Member of the ANC’s N.E.C. International Relations Sub-Committee & former SA Ambassador to Eritrea “This volume deserves to become a go-to classic on South African foreign policy. Its in-depth analysis will appeal to established experts in this area; its breadth will engage newcomers; its insights will be useful to scholars and practitioners alike.” Professor Amrita Narlikar, President, German Institute for Global and Area Studies (GIGA) “This book offers compelling insights on South Africa’s foreign policy ... These varied pieces provide textured and critical perspectives that may help open up an avenue to re-imagine South Africa’s foreign policy afresh in the post-Zuma years. It is a compendium that should appeal to scholars of international relations, practitioners of foreign policy, and the broader policy community.” Professor Mzukiso Qobo, Head, School of Governance, University of the Witwatersrand “This nuanced and richly detailed volume offers the reader superb analyses of South Africa’s foreign policy ... The authors’ contributions ... present both theoretical considerations and specific policy recommendations, which make the book highly useful for both scholars and policy makers ... Each chapter is thus certain to significantly contribute to promoting the public debate about South Africa’s place in the world.” Professor Oliver Stuenkel, Fundação Getulio Vargas (FGV) Table of Contents ACKNOWLEDGMENTS CONTRIBUTORS Defining a South African foreign policy for the 2020s: Challenges, constraints and opportunities by Daniel D. Bradlow, Elizabeth Sidiropoulos & Luanda Mpungose Foreign policy under the Constitution by Jonathan Klaaren & Daiyaan Halim The courts and foreign policy powers by Nicole Fritz Overcoming bureaucratic and institutional challenges in South African foreign policy making by Arina Muresan & Francis Kornegay South Africa’s security interests in Africa: Recommendations for the 2020s by Aditi Lalbahadur & Anthoni van Nieuwkerk South Africa’s peace and security interests beyond the continent by Garth Le Pere & Lisa Otto Regional integration and industrial development in Southern Africa: Where does South Africa stand? by Maria Nkhonjera & Simon Roberts South Africa and African continental economic integration in the 2020s by Lumkile Mondi Negotiating climate change in an increasingly uncertain global landscape: Is there light at the end of the tunnel? by Ellen Davies, Saliem Fakir & Melisha Nagiah Reforming the institutions of global economic governance and South Africa by Cleo Rose-Innes Challenges and opportunities for non-traditional diplomacy by Fritz Nganje & Letlhogonolo Letshele Lessons learned and the path forward by Daniel Bradlow, Elizabeth Sidiropoulos & AnaSofia Bizos APPENDIX INDEX

Authors: Daniel D. Bradlow
Categories: Law
About the publication South Africa’s foreign policy makers are facing a substantial challenge. From the advent of the democratic era in 1994 through to the ea

Compendium on the legal protection of human rights defenders in Africa

Authors: Rajiv Bhatia
Categories: Political Science
This book explores the emergence and assertion of Africa as a significant actor and stakeholder in global affairs and the transformation of the India–Africa r

Authors:
Categories: Political Science
This is the first edition of the Yearbook on the African Union. It is first and foremost an academic project that will provide in-depth evaluation and analysis

Authors: Chris Landsberg
Categories: Political Science
The richness of public and academic discourses on the past, present and future direction of South Africas role in Africa and the world suggests that as a sub-di

Bulletin of the Atomic Scientists

Authors:
Categories:
The Bulletin of the Atomic Scientists is the premier public resource on scientific and technological developments that impact global security. Founded by Manhat

Authors: Nikolas K. Gvosdev
Categories: Political Science
In a truly contemporary analysis of Moscow's relations with its neighbors and other strategic international actors, Nikolas K. Gvosdev and Christopher Marsh use

Authors: Oliver Stuenkel
Categories: Political Science
The establishment of the IBSA as one of the principal platforms of South-South cooperation is one of the most notable developments in international politics dur